Central Great Barrier Reef spans the central Barrier Reef from Townsville in Northern Queensland, south to Mackay and includes many of the iconic islands (such as the Whitsundays) and famous reefs that this region is known for.

Townsville (pictured below) is the largest tropical city in Australia, in the central Great Barrier Reef area and enjoys over 300 days of sunshine each year, which lends itself to tourism activities all year round and an abundance of outdoor activities. 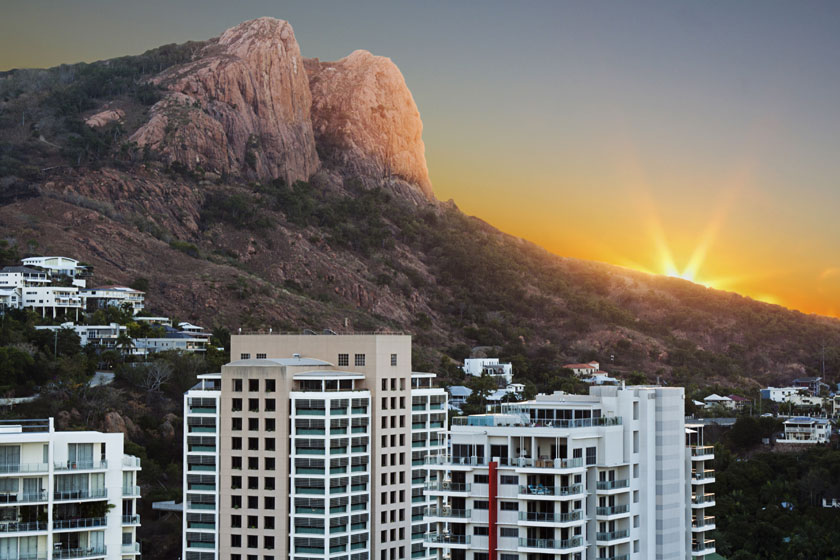 One of the most interesting things to see in Townsville is Reef HQ, the only living coral reef in captivity – a fact which means that visitors can actually see the Great Barrier Reef while safely on land.

Palm Island is about 65 km north-east of Townsville and is the main Island of the Greater Palm group taking in 64 square km of small bays, sandy beaches and steep forested hills rising to a peak of 548 metres.

Magnetic Island (pictured below), just offshore from the city of Townsville, is a 52 km² mountainous island which has effectively become a suburb of Townsville having well over 2000 permanent residents. 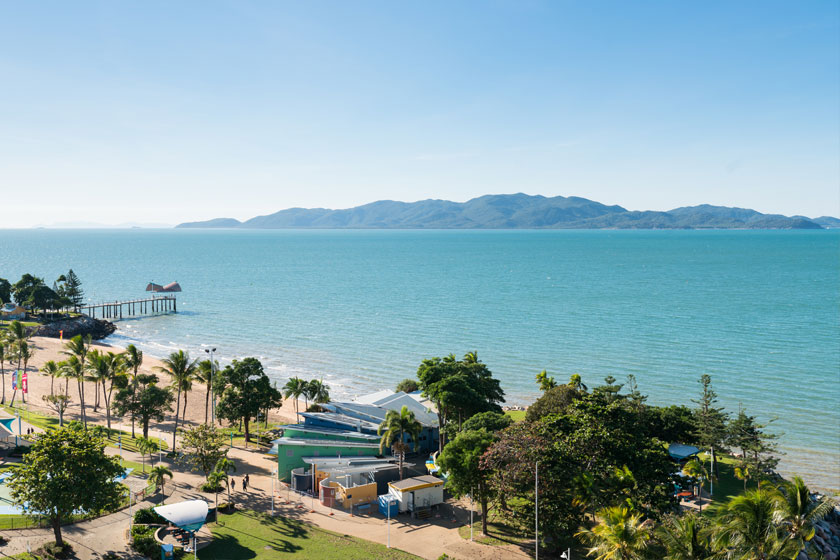 It is accessible from Townsville by ferries arriving at Nelly Bay. There is a large 27 km² national park and bird sanctuary and excellent walking tracks can be taken between the populated bays and to fascinating historic tourist destinations such as the World War II Forts.

The name of the island came about because of the apparent “magnetic” effect it had on the ship’s compass of Captain Cook as he passed the island when sailing up the east coast of Australia in 1770.

The town of Ayr (pictured below) on the Burdekin River, lies 88 km south of Townsville, at the heart of one of the most productive sugarcane-growing areas in Australia and is an attractive place for tourists to visit. 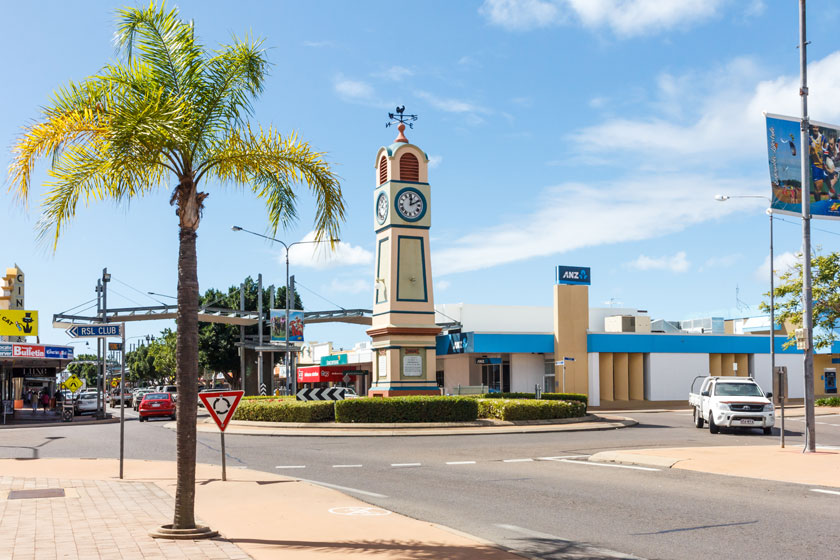 Bowen is located 206 km south of Townsville. The great appeal of Bowen lies not in the town itself but in the unspoiled bays to the north which boast some of the most beautiful beaches in the tropical north.

The Whitsunday Islands, known affectionately as ‘The Whitsundays’, are a collection of 74 beautiful and popular islands in the Central Great Barrier Reef of which the most important are Daydream Island, Dent Island, Hamilton Island, Hayman Island, Hook Island, Lindeman Island, Long Island, and South Molle.

The Whitsundays are home to the iconic Heart Reef (pictured below), located in the middle of Hardy Reef, a suspended lagoon which is approximately 60 kilometres from Airlie Beach on the mainland. 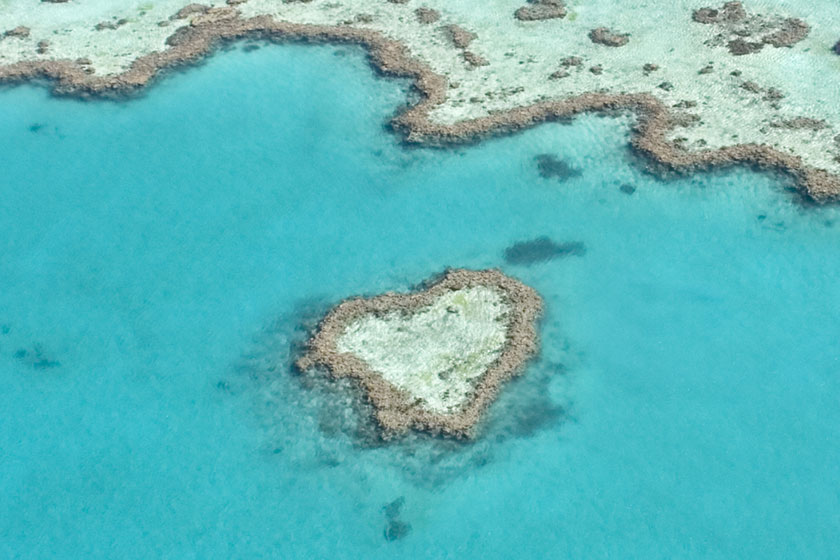 While much of Hardy Reef is accessible and ideal for snorkelling and scuba diving, you are not allowed to snorkel or dive at Heart Reef.

Due to its extraordinary status, Heart Reef is protected, so you can’t snorkel and scuba dive at Heart Reef, however, you can still see and experience the reef by air. Heart Reef is a very popular and much-appreciated site with a handful of commercial helicopters and seaplanes running scenic flights.

Of the 74 islands, only 7 have resort facilities. Beyond the resorts the whole area is part of the Great Barrier Reef Marine Park and the uninhabited islands are all controlled by National Parks and Wildlife. It is possible to visit the uninhabited islands by charter boat, private boat or water taxi. However it is necessary to obtain camping permits from the National Parks Office if you intend to stay the night.

Daydream Island is a small island only 15 minutes by water taxi from Shute Harbour on the mainland and is easily accessible to day trippers. The island’s only resort, Daydream Island Resort, is a suitable destination for the general leisure market of all ages.

Recognised as one of the most luxurious resort destinations on the central Great Barrier Reef, Hamilton Island is a very good example of how the Great Barrier Reef can match any tropical paradise in the world.

Lindeman Island (pictured below), the first of the islands in the Whitsunday group to be developed, is covered by more than 690 hectares of World Heritage Listed National Parkland, so you’ll never run out of things to see and do. 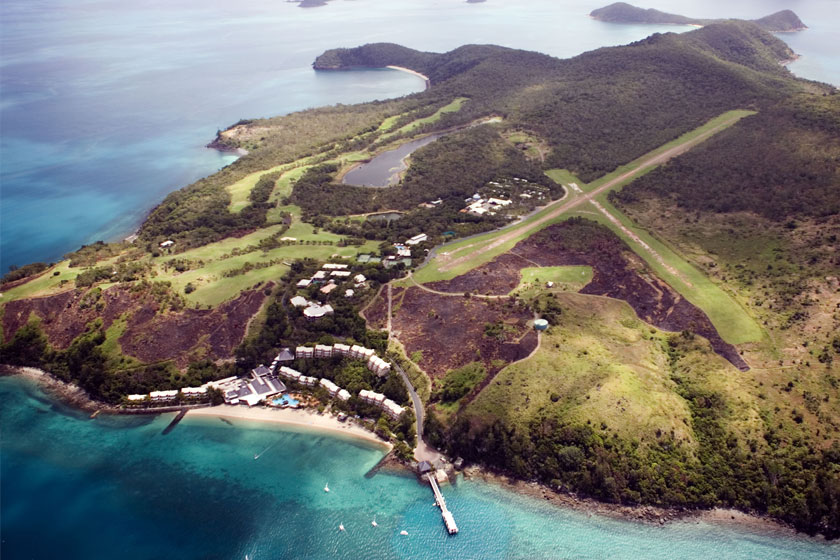 Brampton Island is located 32 km north-east of Mackay and is considered by some to be the southernmost island in the Whitsunday Island group. A large 770 ha island with seven idyllic beaches which are isolated and delightful. Most of the island is part of the Brampton Island National Park.

The town of Mackay, where day tours and extended charters to the Great Barrier Reef are available, lies halfway between Cairns and Brisbane on the southern bank of the Pioneer River along the Whitsunday Coast, just north of the Capricorn Coast, at the southern end of central Great Barrier Reef. There are over 30 beautiful beaches in the Mackay region with Town and Illawong beaches close to the centre of town.

Continue to the southern region of the Great Barrier Reef.